Unsatisfied with the winter in Geneva, just days before the Siberian cold hit the Lake Geneva shoreline, the EC decided to organise a trip to the nearby Jura to experience the Swiss winter as it had been promised to all those coming from near and afar to study together at the Institute.

A week later, after winter had finally come and delivered unimaginable amounts of snow to most of Europe, a group of 13 people gathered on Saturday morning at Gare Cornavin to spend a day wandering through the winter landscape of St-Cergue in the Jura near Nyon, just an hour away from Geneva.

As expected, we arrived on time in the small town of St-Cergue and made our way to the local tourism office to pick up the snowshoes. After a short explanation that we should basically follow the pink poles, and some initial troubles with a faulty snowshoe that had to be replaced, we were on our way. The route first led to the peak of Fruitières de Nyon, a rough 300m climb from St-Cergue, where we had an extended break to air out our sweaty hair and replenish our blood sugar with some Swiss chocolate and cookies.

After another small climb, the route then continued for about 4km in a smooth decline to the train station of La Givrine. Although most of the landscape was covered in cloud-like fog formations, and rough winds on the peak made the snowfall come in sideways, the sky opened up towards the end, giving a calm touch to our descent to La Givrine. 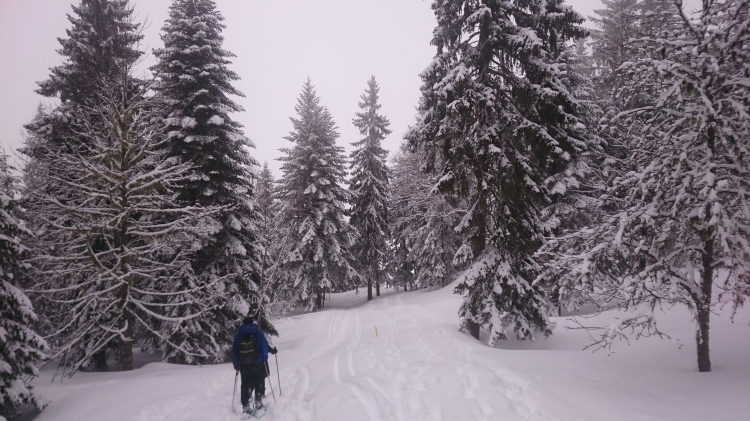 The 8km hike through fresh snow had taken longer than we had anticipated, so we decided to hitchhike back to St-Cergue instead of finishing the round trip. A hot fondue with wine and tea in one of the rustic restaurants in St-Cergue rounded off the day perfectly, before we boarded our Geneva-bound train and left the mountains behind us, now a mere memory of winter. 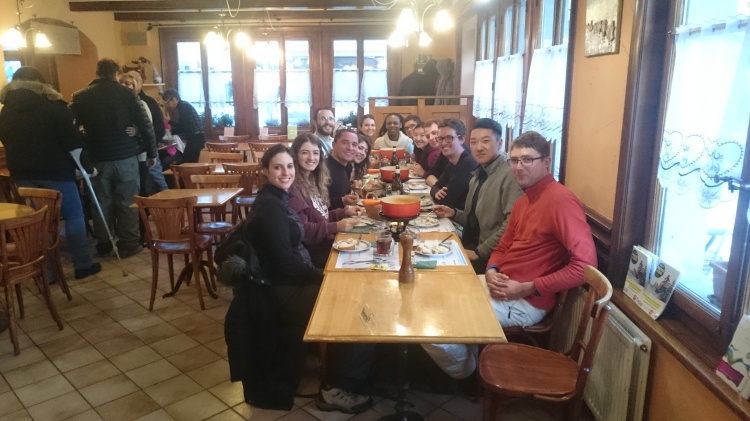