by Eva Bortolotti and Annika Erickson-Pearson

The Environmental Committee (EC) brought the emerging debate on the intertwined paths of climate change and security to the Geneva Peace Week stage on the 7th November 2018.  The panel discussion, organized at the Palais de Nations in collaboration with the Quaker United Nations Office (QUNO), saw a large and enthusiastic audience and an all-female panel with speakers from the Geneva Center for Security Policy, the UN Environment Program, and QUNO.

“Climate change is increasingly viewed as a direct threat in itself and a multiplier of many other threats—from poverty to displacement to violent conflict” affirmed Lindsey Cook, Representative for Climate Change at QUNO. Starting the discourse from the findings of the recently-released report of the IPCC, the panelist explained how a rights-based approach to climate actions is essential in ensuring the prevention of destructive conflicts.

The key of the conversation was emphasizing the growing nexus of climate change and security. “Climate change is increasingly threatening people’s safety” reports Anna Brach, from the GCSP. Often we find security conversations unrelated to the environment, and environmental conversations that lack a security or peace dimension. These two elements are increasingly interrelated, particularly as the effects of climate change show and accelerate.The promotion of off-grid electricity production and the ownership of decentralized renewable energy policies are only some of the tools already at our disposal to face these challenges. Amanda Kron from UN Environment reported some insightful case studies from both Sudan and Nepal to stress the need of  strengthening Resilience to Climate-Fragility Risks. 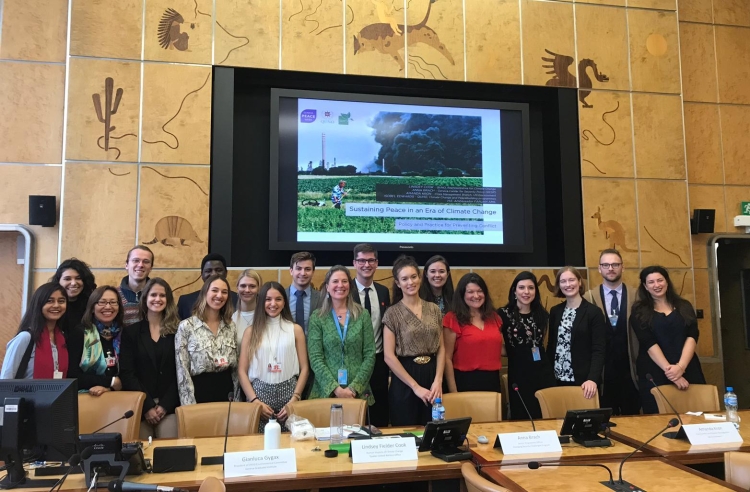 After this fascinating analysis which ranged from the global to the local level, the conversation was concluded by the intervention of H.E. Ambassador Mr. Farukh Amil of the Permanent Mission of Pakistan to the United Nations Office. The ambassador provided some insightful details on the Pakistan’s state perspective on climate change.

“The morning of the panel, we really weren’t sure if people were going to show up. We knew this an issue relevant to conversations about peace, but did the rest of Geneva care?” said EC member Annika Erickson-Pearson. “Out of so many other inspiring events, I was surprised to see that this was the only one to tackle the ever-growing elephant in the room: climate change.”

It turns out Geneva did care. The room was packed to standing room only, and over 25 people had to be turned away at the door. Geneva voted with its feet: climate change matters, and is crucial to peace.